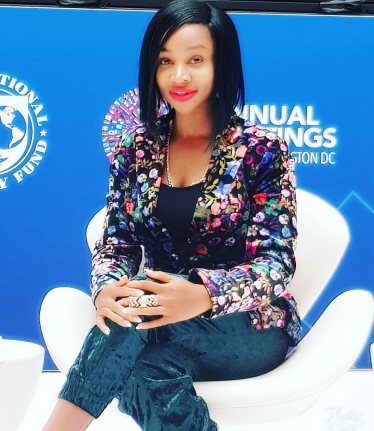 Dr. Princess Halliday is redefining what it means to be a revolutionary leader. An authentic young lady who leads with a high emotional intelligence-A voice to reckon with, worthy of great honor, and attracts reverence. Having accomplished so much at such a young age, Dr.Princess Halliday makes us believe that you can be young, pretty, intelligent, and still do things the right way. She has one on one conversations with presidents, presidential candidates, governors, great leaders, celebrities, and ordinary people doing extraordinary things. Dr. Princess Halliday speaks three different languages besides English. She is fluent in Hindi, Some French, and Arabic. She is from the Halliday Awusa “King Halliday” House of Grand Bonny Kingdom, making her a Princess by birth.

Dr. Princess Halliday is a member of the International Honor Society in Education- United States. She is a leadership professor and authentic leadership teacher with strong analytical skills and a proven record of professional success. Solid foundation in teaching leadership, emotional intelligence, organizational development, global leadership, change, authentic leadership, conflict resolution, ethics, strategic communication, leading innovation, and group dynamics through an educational experience. In 2019, Dr. Princess Halliday developed six new leadership courses for Virginia State University College of Sociology and Criminal Justice. Although Virginia State University was founded in 1882, this would be the first time the department would have leadership courses integrated into its curriculum since inception. The chair of the department, Dr. Joyce Edwards, saw the need for undergraduates and graduate students to learn how to lead authentically.

With over 18 years of professional experience, Dr. Princess Halliday has been a lecturer on global leadership, ethics, leadership, and power to master’s degree students at California State University Northridge. She is an internationally recognized leadership consultant and multiple award-winning extraordinary speakers. She has spoken in various international platforms on Politics, Power and Leadership. Having exercised her expertise in high-risk domestic and international situations; global conflict and terrorist incidents; diplomacy and business. She is determined to change the culture of leadership for men, women, boys and girls. In 2017, Dr. Princess Halliday developed and presented lectures to the U.S Army base Virginia on “emotional intelligence, leadership and service members transitioning from the military.” This initiative was accepted and considered for integration into the system to help army officers and families during their transition to civilian life. Dr. Princess Halliday keeps accomplishing the extraordinary; she teaches men and women, power, leadership, and ethics in various sectors. Leaders from fortune 500 companies benefit from her leadership deliveries. As a young woman coming from a country where young women are not often believed to be carriers of great initiative, Dr. Princess Halliday is committed to developing and building a framework for economic cooperation, bringing to bear all macroeconomic and financial sector issues that bear on global stability and empowering leaders To Do The Extraordinary with focus on creating a road map for female political participation and leadership inclusion.

As a young professional who strives daily for the extraordinary, with experience, she works to foster global monetary cooperation, transnational trade, securing financial stability, promoting high employment, reducing poverty, and also committed to peace and understanding in the world as a whole. With the on-going political unrest in some parts of Africa, Princess Halliday offers her expertise to the Government on Peace, Security, Image, and Leadership. Dr. Princess Halliday made history as the first Nigerian to receive a degree in leadership that transcribes leading authentically.

At age 3, Dr. Princess Halliday became a radio talk show host, inspiring and motivating kids on a positive lifestyle. She has a wide range of experience in corporate management, strategy, and motivational speaking. At age 14, she was admitted into the University to study Petroleum Engineering. From age 14, she has held leadership positions and became a strategy and business consultant for notable oil and gas, manufacturing, and financial services companies. On the day of her first-degree graduation, Dr. Princess Halliday was hired straight out of college as a leadership and strategy executive. She further spearheaded the first-ever standard world-class facility security systems for SHELL Petroleum Development Company Nigeria.

Dr. Princess Halliday is a petroleum engineer, international business consultant, entrepreneur of international businesses, creator of Empower Africa Initiative and executive producer and host of the Princess Halliday Show”, At age nineteen, she first birthed EAI which was then in its first season, completely in exclusivity with MNET Africa, and syndicated in 48 countries globally through the MNET platform. EAI builds the self-esteem and self-worth of people by changing their outlook on life, broadening horizons and providing tools for self-empowerment/ efficacy, advancing the world by inspiring, preparing, empowering and connecting leaders to drive change. Princess Halliday’s passion for showcasing positivity and her uncanny ability to lead authentically with emotional intelligence and communicate with empathy has solidified her as one of the young female authentic voice in the world. Over the years, Dr. Princess Halliday has interviewed Presidential candidates, World leaders, Movie stars, Governors, Senators, Ordinary people doing extraordinary things, and more. Most recently, she hosted Commonwealth London consisting of 54 Commonwealth countries, and helped raised funds for commonwealth charity. She serves as Director of Leadership & Strategy for Commonwealth.

In 2014, Princess Halliday along with women of the state visited Morocco for the world leaders’ summit/Crans Montana female leadership forum in Rabat Morocco where she met the President of Malta, President Marie Louise Coleiro Preca- the youngest female to assume the office of the President, and her Chief of Staff Mr. John Camilleri, where they would later discuss global leadership, image, and power.

Dr. Princess Halliday consistently notes that research has shown that women are still underrepresented in leadership positions, and she is determined to help change this narrative where young women are rarely seen at the table.

“For a very long time, women have been underrepresented in elite leadership roles with a mindset that systematically underestimates their abilities. To see these phenomenal women doing extraordinarily in significant leadership positions and going beyond the perceived leadership labyrinth is Laudable” -Princess Halliday-

In July 2016, Empower Africa Initiative alongside princess Halliday designed the Empowered merchandise theme “Empowered.”Designed to help prepare and guide men and women to their Empowered parity. Portions of proceeds from this design go towards helping the underprivileged in Africa. The sales have garnered support from several celebrities and people of note.

Dr. Princess Halliday revealed during her speech at the women in power forum in Beverly Hills California 90210 that the sole reason EAI was created is showing positivity to the world and generating revolutionary leaders, keeping in mind that people are more likely to try to tackle difficult challenges when they see others whom they respect doing so. She holds a Ph.D. in Organizational Leadership from Liberty University Lynchburg Virginia, a Masters degree in Leadership from Woodbury University Los Angeles California, a Bachelors Degree in Petroleum Engineering, an  has completed professional programs from  Harvard University, and the School of Business, Virginia Commonwealth University. She is a Board Certified Qualified Mental Health Professional in the state of Virginia and a Certified Human Research Participant. Dr. Princess Halliday is determined to make a difference in the lives she touches that stretches further than ordinary boundaries—a true testament to reaching for the stars!

Dr. Princess Halliday will forever be acknowledged as a young innovator through the landmarks she is making, becoming the first Nigerian to accomplish a degree in leadership and really understanding what it means to lead authentically. In line with other prestigious qualifications she has garnered, breaking the stereotyped understanding of leadership has become her core as she progressively implements the extraordinary. As host of a television show, she is inspiring millions of people across the world, discussing significant issues on her show, such as equal rights toward gender, leadership, positive mindset, poverty, and many others. Dr. Princess Halliday will be an icon, someone who paves the way for others to become successful. One phrase qualifies Princess Halliday – “AN EXTRAORDINARY YOUNG LADY.”

She is determined to redefine leadership. Presidential aspirants in West Africa sought her expertise in leadership and authenticity.

Dr. Princess Halliday is committed to ensuring men and women are authentically educated, and young girls receive the educational opportunity, leadership development and mentoring support necessary to become the new generation of female leaders across the continent of Africa as she strives to empower girls to become influential leaders and decision-makers who will lead authentically.

Over the years, Dr. Princess Halliday has acted as a corporate advisor to government institutions, international business advisors across America, Europe, and Africa. As a leadership and strategy expert, she currently spearheads the World Leaders Forum & Honors slated to hold in Washington DC 2021 to discuss, creating a road map, and building the economy. Dr. Princess Halliday serves on the board of directors for Miss Commonwealth London. Currently, she sits on the board of leadership for Women Ablaze Virginia, working for the elimination and discrimination against women and girls, advocating for women and girls’ equal rights, combating discriminatory practices, and challenging the roles and stereotypes that affect inequalities and exclusion . Dr. Princess Halliday is usually referred to as the Face of Authentic Leadership.

Do you need a custom keynote speech on women, power, or leadership that will bring people to their feet and give them valuable takeaways?

Do you want to set up a panel or an experiential leadership workshop that teaches practical tools and motivates your employees or professional group?

Are you setting up a fundraiser to cultivate donors and garner media?

Princess Halliday tailors each presentation to your objectives, with heart, humor, experience, authenticity, and leadership.

One of our goals is to empower one million people on authentic leadership, mindset transformation, and the way forward in our economy. Happy to work with you in this endeavor.

In recognition of her work in diverse fields, Dr. Princess Halliday has received a number of laurels, including being recognized by the International Commonwealth platform in London (2014), where she was honored with the International Voluntary Humanitarian Environmental Services (IVHES) Awards for outstanding leadership and also given the award for the Youngest Executive Producer/TV Talkshow Host.

The Canadian federal government recently honored Princess Halliday with the Outstanding Leadership to Africa award in London in November Member of the International Honor Society in Education- United States of America.